Alopecia areata is considered an autoimmune disease, in which the immune system, which is designed to protect the body from foreign invaders such as viruses and bacteria, mistakenly attacks the hair follicles, the tiny cup-shaped structures from which hairs grow. This can lead to hair loss on the scalp and elsewhere.
In most cases, hair falls out in small, round patches about the size of a quarter. In many cases, the disease does not extend beyond a few bare patches. In some people, hair loss is more extensive. Although uncommon, the disease can progress to cause total loss of hair on the head (referred to as alopecia areata totalis) or complete loss of hair on the head, face, and body (alopecia areata universalis).
Alopecia areata is not a life-threatening disease. It does not cause any physical pain, and people with the condition are generally healthy otherwise. But for most people, a disease that unpredictably affects their appearance the way alopecia areata does is a serious matter.
The effects of alopecia areata are primarily socially and emotionally disturbing. In alopecia universalis, however, loss of eyelashes and eyebrows and hair in the nose and ears can make the person more vulnerable to dust, germs, and foreign particles entering the eyes, nose, and ears. 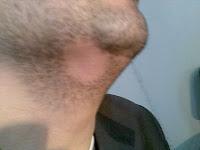 Alopecia areata often occurs in people whose family members have other autoimmune diseases, such as diabetes, rheumatoid arthritis, thyroid disease, systemic lupus erythematosus, pernicious anemia, or Addison’s disease. People who have alopecia areata do not usually have other autoimmune diseases, but they do have a higher occurrence of thyroid disease, atopic eczema, nasal allergies, and asthma.