The disease is typified by the sudden onset of a severe fever, chills, headache, pain behind the eyes (retro-orbital pain), photophobia, and joint and muscle pain. The victim may appear flushed at the onset of the fever and a rash may appear on the torso after 3-4 days and spread to the rest of the body. Lymph nodes are often inflamed. 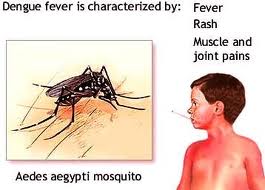