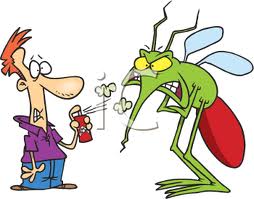 What’s the Scoop on Insect Repellents?

Barb Ogg, Ph.D., Extension Educator
With the introduction of West Nile Virus, people are naturally concerned about mosquito bites. One way to reduce bites is to use an insect repellent when spending time outdoors in mosquito-infested areas. But, a survey conducted by Harvard University, showed 40 percent of adults in the United States did not take precautions to prevent mosquito bites. Maybe it’s because some of the older repellents are greasy and have an odor so people don’t like to use them. Many people don’t realize
there are newer odorless and non-greasy products on the market today. The following information will help you decide what repellents are best for you.
The Center for Disease Control recommends the use of active ingredients which have been registered by the US-EPA. These active ingredients have been reviewed during the registration process and were approved for effectiveness and human safety, when applied according to the directions on the product label.
Many factors play a role in a repellent’s effectiveness. These factors include:
**Product concentration. In general, the higher percentage of active ingredient, the greater the time the product will be repellent.
**Frequency and uniformity of application.
**Activity level of the user. The effectiveness of a repellent is reduced by evaporation and absorption from the skin surface and wash-off by sweat.
**Environmental conditions: Rain or water, washing the repellent off the body, wind and high ambient temperatures will reduce a product’s effectiveness.
**User’s overall attractiveness to blood-feeding arthropods like mosquitoes. (Yes, some unfortunate people are more attractive to mosquitoes.)
**Number and species of blood-feeding arthropods like mosquitoes.
Products containing the following active ingredients have been shown to provide reasonably long-lasting protection.
–DEET. (Chemical names: N,N-diethyl-m-toluamide or N.N-diethyl-3-methylbenzamide)
–Picaridin. (KBR 3023, Chemical name: 2-(2-hydrozyethyl-1-piperidincarboxylic acid 1-methylpropyl ester)
–Oil of Lemon Eucalyptus or PMD. (Chemical Name: para-methane-3,8-diol which is the synthesized version of oil of lemon eucalyptus.) This recommendation does not include “pure” oil of lemon eucalyptus, which has not been tested for safety and efficacy.
–IR3535. (Chemical Name 3-[N-Butyl-N-acetyl]-aminopropionic acid, ethyl ester)
The EPA characterizes the active ingredients DEET and picaridin as “conventional” repellents and oil of lemon eucalyptus (PMD) and IR3535 as “biopesticides”, which are derived from natural materials.
DEET. Right now, the gold standard for insect repellents is still DEET, a chemical developed in the 1940’s for the U.S. Army. Depending on the situation and concentration, DEET provides 2-8 hours of protection. It has broad spectrum activity and is effective against mosquitoes, biting flies, midges, chiggers, fleas and ticks.
Millions of people have used DEET since it become available to the general public in 1957. It is considered safe when used according to the label instructions.
For casual use, a product containing 10-30 percent DEET should be adequate. For children, it is best to be conservative and keep the concentration of DEET at 10 percent or less. In many situations, it may make sense to spray clothing.
Some people don’t like DEET repellents because products have a greasy feel and an odor. DEET can damage plastics, leather, and synthetic fabrics like rayon so care must be taken when applying the repellent to clothing.
Picaridin. Picaridin has 4-8 hours of effectiveness, but, because it is odorless, not irritating or greasy and doesn’t damage plastics or synthetic materials, many people prefer it to DEET.
Picaridin-based repellents have been available in Europe, Australia, Latin America and Asia for many years, and were introduced into the U.S. market in 2005. Some products containing picaridin include Cutter Advanced™ Insect Repellent (7%), Cutter Advanced Sport™ (15%), Avon Skin-So-Soft™ Bug Guard Plus Picaridin (10%), Goready Insect Repellent™ (20%), Off Family Care Insect Repellent™ (10%) and Walgreens Light and Clean Insect Repellent™ (7%). In addition to mosquitoes, picaridin was tested in lab and field studies and found to be effective against biting flies and ticks.
Consumer Reports compared Cutter Advanced™ (7% picaridin) with Cutter Unscented (10% DEET) against aggressive (Aedes spp) and less aggressive (Culex spp) mosquitoes. They found both repellents prevented bites for about two to three hours with the aggressive species, eight hours for less aggressive species.
Oil of Lemon Eucalyptus. The active ingredient PMD has been isolated from the oil of the lemon eucalyptus plant. It was brought to the U.S. market in 2002. A 40% formulation appears to provide about 6 hours protection. PMD-based repellents show low toxicity, but can be an eye irritant.
Marketed products containing oil of lemon eucalyptus include Repel Lemon Eucalyptus Insect Repellent Lotion™ (30%), Repel Plant Based Lemon Eucalyptus Insect Repellent™ (40%) and Cutter Lemon Eucalyptus Insect Repellent (30%) and Off Botanicals Insect Repellent™ (10%).
IR3535. This repellent (3-[N-butyl-N-acetyl]-aminopropionic acid) is available exclusively through the Avon Corporation as Skin-So-Soft™ Bug Guard Plus IR3535 Active Insect Repellent (7.5%) or Skin-So-Soft™ Bug Guard Plus IR3535 Expedition Insect Repellent (15-20%). It is labeled for use against mosquitoes, ticks and biting flies. In some studies IR3535 provided protection for 4-6 hours, but another study performed at USDA laboratories found that 25% IR3535 was 10-100 times less effective than DEET.
What about Skin-So-Soft bath oil? Made by Avon, this oil has been shown in laboratory tests to have a minimal repellent effect. It is at least 10 times less effective than 12.5% DEET. Avon has never marketed the bath oil as an insect repellent.