Tinea corporis (often called ringworm of the body) is a common skin disorder, especially among children. However, it may occur in people of all ages. It is caused by mold-like fungi called dermatophytes. 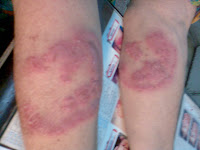 Fungi thrive in warm, moist areas. The following raise your risk for a fungal infection:

Tinea corporis is contagious. You can catch the condition if you come into direct contact with someone who is infected, or if you touch contaminated items such as:

The fungi can also be spread by pets (cats are common carriers).
Symptoms include itching and a ring-shaped, red-colored skin rash. The rash may occur on the arms, legs, face, or other exposed body areas. The border of the rash lesions look scaly