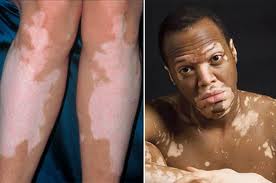 Loss of skin pigmentation in pathes.This can affect persons of any race or ethnic group.

Body parts involved?
Skin on the back of the hands,face and armpits usually involved.

Sex or Age most affected?

They are flat,white and can’t be felt with fingers.

They spread to form very large,irrigularly shaped areas without pigmentation.

They are usually on both sides of the body in approximately the same place.
Their size varies from 2mm or 3mm to several centimeters in diameter.

They don’t hurt or itch.

How to prevent?
Cannot be prevented at present.